Lego Ice Cube Trays - What Would You Build? 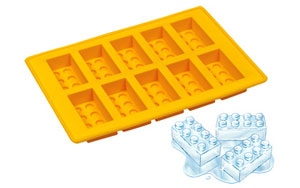 Create your own ice sculptures with Lego Ice Cube Trays (or Ice Brick Tray as Lego calls it). The ice cube trays are made entirely of silicone so unlike traditional plastic ice cube trays, they will take a lot more punishment. And punishment they will take when you have kids (yeah Dad counts as a kid too) in the house. Each one of the Lego Ice Cube Trays lets you make 10 ice bricks at a time, so you will be need a lot of of these trays if you want to make crazy ice sculptures. Still, Lego came up with a pretty clever idea.

You can get your dirty little hands on it directly from the Lego store.

Permalink • Posted by Hugo on June 19, 2007
Posted In: Kitchen and Baths, Miscellaneous, Toys and Games