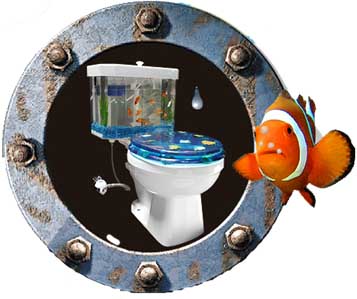 So you want that fish tank but have nowhere to put it? How about your bathroom? That's right! Aqua One technologies the creator of the H2ORB has introduced the new Fish `n Flush. The Fish `n Flush is a patented 2.2 gallon capacity two piece aquarium toilet tank. The Fish `n Flush is a great addition to your guest or children's bathroom; it will get your guest wanting to go if you know what we mean. It is a great space saver if you always wanted a fish tank but never had anywhere to put one.

Don't worry your fish wont get flushed down the toilet when you flush it. The fish tank is actually in a separate chamber from the one used to do the flushing. The Fish `n Flush also features a build in LED light that can double as a night light for those midnight emergencies. The Fish `n Flush Fits two-bolt tank to bowl configurations with a two-inch flush valve and a bottom-mounted, fill-valve inlet. So what if you are not interested in fish? Not to worry the Fish `n Flush can be used for smaller reptiles, scorpions, or snakes let your imagination go wild!

The kit includes a dual filter system with pump, 2-Nine inch Artificial Plants and a basic aquarium guide to get you started. Unfortunately fish are not included. Not too shabby though for a mere $299.

Permalink • Posted by Hector on March 19, 2007
Posted In: Kitchen and Baths, Toys and Games