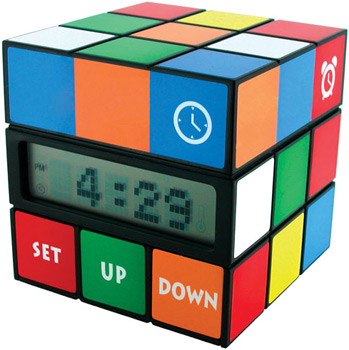 #5. 80's Cube Clock
An alarm clock designed to work almost like a rubik's cube. You twist the top and the display changes between date, time, alarm and temperature. The tamest of the bunch, but one that brings back nostalgia. 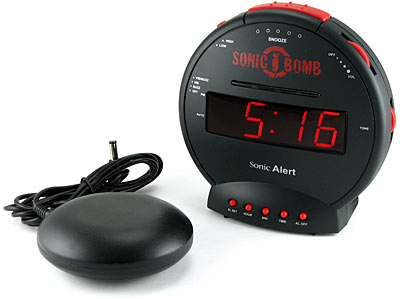 #4. Sonic Bomb Alarm Clock (AKA "The Bomb")
Designed to wake-you-the-hell up, the Sonic Bomb alarm clock puts out an ear-piercing 113 decibels at the highest setting. In other words, its like being in a front row of a rock concert, but a thousand times more annoying. If sound doesn't phase you, perhaps the included bed shaker will do the job. 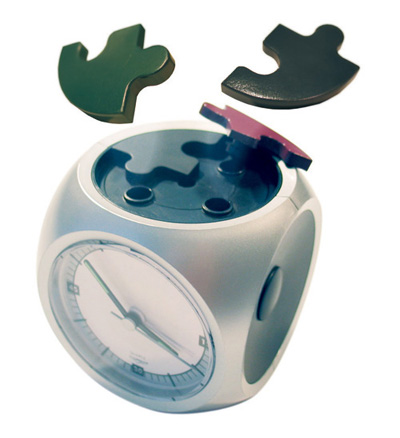 #3. Puzzle Alarm Clock
For those of you with Josh Nash Jr envy, the solution to waking up perhaps involves a bit of mental stimulation. The puzzle alarm clock wakes you up by ejecting into the air four different puzzle pieces scattering them everywhere as the alarm is blasting. In order to shut the alarm off, you must put all 4 pieces of the puzzle back in the right place.

#2. Clocky Alarm Clock
Clocky is an alarm clock on wheels. When the time comes (and it will), Clocky starts up his wheels and runs around your house like mad (steer clear of lamps and cats) as the alarm beeps over and over. The only way to stop the mayhem is to get your lazy bum off your bed and turn Clocky off. 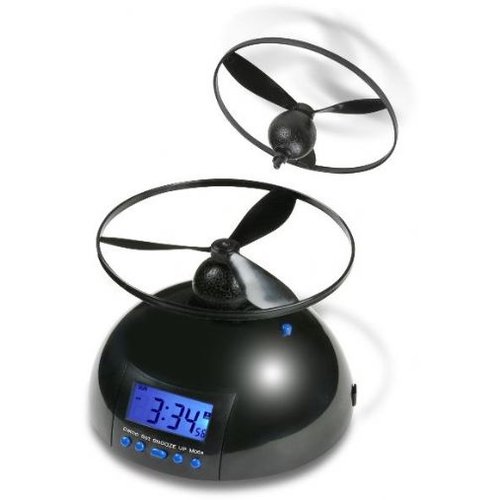 #1. Flying Digital Alarm Clock
And the overall craziest alarm clock is the flying digital alarm clock. Though not the prettiest of the bunch, it certainly presents the biggest challenge. Be ready in the morning because as soon as the alarm goes off, the propeller is launched up into the air and it flies around the room. Your only recourse is to put the propeller powered device back into the base. Good luck staying awake after that.

Permalink • Posted by Hugo on August 11, 2009
Posted In: Accessories and Decor, Editorials, Miscellaneous, Toys and Games

Technology freak Posted Dec 18, 2017
The best clock ever ., clocky alarm clock
I've bought this version :
https://www.townoftech.com/2017/10/clocky-alarm-clock-that-hides-from-its.html
and it really helps me to wake up amazingly in time... you gotta try it