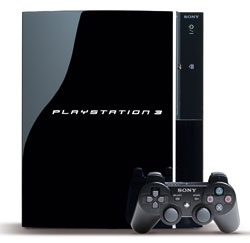 We are almost sure you've heard by now that the new Sony Playstation will be released in November 17th. In fact, the news channels are already predicting the end of the universe when the system is released due to the scarcity of the product. And with only 400,000 units shipping in the United States and 100,000 units in Japan, the Playstation 3 will no doubt be extremely hard to find. But what's with the hype?

For starters, the Sony Playstation 3 packs a megaton of a punch. It is powered by a 3.2GHz Cell Processor, a 550MHz NVIDIA RSX Graphics Card along with 512MB of RAM. This means the Sony Playstation 3 will be capable of pushing polygons, millions of them, with relative ease. Coupled with the fact that the console can perform all sorts of graphics enhancements in its sleep, you get gorgeous looking games like Motorstorm and Resistance Fall of Man ? games that push the boundaries of how video games should look and sound.

The console also features free online play, although Sony has not yet revealed what their online service will look or feel like. Sony did announce that you will be able to download Playstation and Playstation 2 games through its online service. Like the Nintendo Wii, the Playstation 3 will also support independent developers by allowing them to create games for the Sony Playstation online service.

What do we really like about the Playstation 3? Believe it or not it's the fact that you can play blu-ray movies. That means that for $599 (or $499 for the basic version of the Playstation 3) you can play 1080p blu-ray movies in your 1080p high-definition television. If you look at it that way, you get an extremely powerful console for $399 and a pretty good blu-ray disc player for $200. That's not a bad deal specially when you take into consideration that it will probably be a couple of years before blu-ray DVD players retail for $200 dollars anyway.

Permalink • Posted by Hugo on November 10, 2006
Posted In: Technology, Toys and Games

HectorG Posted Dec 19, 2009
I love the new Netflix streaming that just made the PS3 that much better!