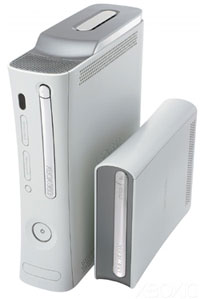 The unit works extremely simple. You simply plug the Xbox 360 HD-DVD player to one of the Xbox 360's USB ports, install the software that comes with the player, and plug the HD-DVD player add-on to the wall with the included power supply and cord. The software you need to install allows your Xbox 360 to recognize the player and adds the capability to view HD-DVD content on your Xbox 360.

Picture quality for this device is outstanding. It easily trumps the Toshiba HD-A1 and the Toshiba HD-XA1 by virtue of 1080p support alone, though video quality is about equal if you are viewing the movies via 1080i and 720p televisions.

There are a couple of downsides to this player that are worth mentioning however. Aside from the simple fact that you will need an Xbox 360, the Xbox 360 unfortunately does not offer HDMI support. In addition, although the drive runs fairly quiet, the actual Xbox 360 console runs loud. So, unless you have the systems enclosed, the noise level might affect your movie watching experience. That aside, the Xbox 360 HD-DVD player is thus far, best HD-DVD player on the market.

For a limited time you can get the Xbox 360 HD-DVD player bundled with a copy of Peter Jackson's King Kong HD-DVD movie and the Xbox 360 Universal Media Remote for $199.99.

Permalink • Posted by Hugo on November 28, 2006
Posted In: Miscellaneous, Technology, Toys and Games