Watch Your Favorite Shows on a 144 inch Inflatable Television 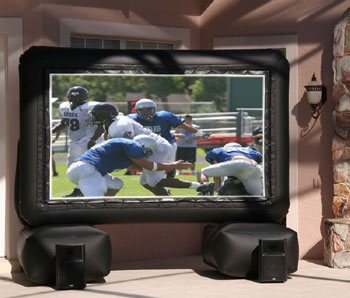 Your dreams of owning an inflatable television have finally come true thanks to Sigma Products Corporation. We admit, the idea of a floating television screen sounds a bit ludicrous at first, but for those who have the money to spend, the product isn't as ludicrous as it sounds. The Inflatable Home Theater Kit, as Sigma Products Corporation calls it, comes in two flavors: a 96 inch kit (model XL 8) and a 144 inch kit (model XL 12).

The 96 inflatable version on the other hand comes with all the essentials, except the screen is smaller and instead of the 120W speakers, it comes with 1 pair of 100W amplified speakers with 8" woofers. This smaller version also has a smaller price tag: $1190 USD.

Of course, you will also need to pony up for a projector that will display the picture on the screen, those can cost anywhere from the mid hundreds well into the thousands.

The way the whole process works is actually very cool. You pump the screen as you would pump any other inflatable device, you connect whatever input device you want into your projector (for example: DVD Player, Game Console, or Satellite TV), and then you point the projector onto the massive screen. After that you lay down in your hammock, sip on a pina colada, and enjoy the show.

Permalink • Posted by Hugo on January 4, 2007
Posted In: Garden and Patio, Miscellaneous, Technology