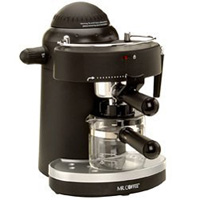 I'll start off by saying that this is as budget of a an espresso machine as you are gonna get. The Mr. Coffee Steam Espresso and Cappuccino Maker (Model ECM150) retails for about $29.99 at most retail outlets, and as such, feels rather cheap. But inside the cheap components something great brews.

I gotta say that this machine is rather odd. The first week of use the unit produced barely-warm espresso. It was actually quite disappointing. One of the best things about espresso (or Cuban coffee) is the hot frothy deep-tasting goodness that comes with the rich-aroma. This machine just didn't quite get there. There is no doubt anyone would get the, I should have spent twenty-dollars more blues. And then something strange happened.

The machine started brewing hot, amazingly-delicious espresso, one after another, after another. We used a variety of Cuban coffee to test out this machine and time and time again it produced the best tasting espresso we've had a in while.

On top of that, some of the parts feel cheap to the touch. The carafe (decanter) handle feels like cheap plastic and the glass as if it can break easily. The brew basket also feels cheap, but it is actually quite sturdy. The filter and brew basket have yet to stick together as is typical of these machines, so it makes clean up for that piece particularly easy.

At $29.99 Mr. Coffee Steam Espresso and Cappuccino Maker feels rather cheap and it produced unexpected results through its initial batches. Its slow pace can make it a bit tough on those who need coffee fast in the early morning. However, the machine brews great tasting espresso, something not typically seen with machines at this price. And for that reason alone, Mr. Coffee Steam Espresso and Cappuccino Maker surprises every time. If you are on a budget and just want great-tasting espresso, this is the espresso machine to get.

Permalink • Posted by Hugo on May 2, 2007
Posted In: Kitchen and Baths, Miscellaneous, Reviews