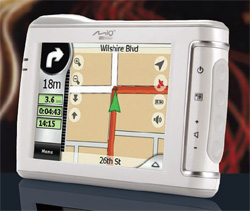 The Mio Digiwalker C310X by Mio Technology Limited is a bit of an anomaly in the world of GPS. It is jam-packed with features typically found in units at twice its price. But with all the features come a bit of confusion as you don't quite know what to do with the unit when you initially turn it on, specially if you've never used a GPS in your life. But after about one hour of getting to know your new toy, you'll begin to see why the Mio Digiwalker C310X is hands down one of the best GPS values on the market.

In the package you will find the GPS holder, windshield mount, car charger, USB cable, application CD and map DVD (containing maps of the entire US including Hawaii and Alaska), and of course, the C310X itself -- basically everything you need to take this sucker on the road.

is the unit's portability. Many of the current GPS we've seen on the market are clunky beasts -- even from the major GPS manufacturers. The Tom Tom One, considered one of the more portable GPS units around is actually less portable that the C310X because it has a rounded hump on the back of the unit that adds depth. The Mio C310X is only 0.78 inches deep and weighs only 6 ounces making it easy to carry around in your pocket or purse. The battery life is also quite significant capable of keeping this unit alive for up to 5 hours after a single charge. The 3.5 TFT display is vibrant and sports a touch screen and and up to 65k colors.

THE PERFORMANCE
I was shocked to see how well this GPS performed. As keyed in your destination, the information would almost immediately be narrowed down and calculations of routes and distances was done at significant speeds. I was surprised that the system took just under thirty seconds to calculate a route between Miami to San Francisco. Nice. As for accuracy, the Mio C310 was very reliable, leading us to the right location throughout our tests.

THE FEATURES
One of the features many GPS manufacturers tout is the ability for their GPS unit to call out the name of the street you are supposed to make your next turn. That feature is missing in the C310X. At first we felt that the lack of the "text-to-speech" feature would be detrimental, but in real-world use, we liked the way the Mio Digiwalker C310X works best. The C310X will command you to "take your next right at 100 yards" making it easier to identify exactly which street you should make your next turn. This is particularly useful when the street signs are missing or hidden from driver view. We like the way it works so much in fact, that we recommend all GPS manufacturers make the "text-to-speech" feature optional in all their future units.

Another feature we loved was the ability to create an itinerary. This means you can add different points of interest or addresses to your trip before you head out and there is no need for you to touch the device again. Should you want to make changes to your itinerary, you can easily remove, add or edit with a couple of simple on-screen button presses.

You can also make changes to your trip on the fly. If you want to avoid tolls, take the shortest route or avoid highways, the Mio Digiwalker C310X has plenty of options that let you do so. And since recalculations are done so fast in this unit, it is easy to go from one to another to see which route you like best.

The Mio C310X also comes pre-loaded with POIs (points of interest) which can be easily accessed through the menu system. In a trip to Orlando we put this feature to the test and it performed extremely well. We were able to pull-up a list of movie theaters around our then current location along with the theater's phone number. One phone call later and we were able to get the movie times. One simple route-to location button push and in a matter of seconds we were on our way. Sadly we did not find a way to add or edit our own points of interest to the GPS. Another let down was that the system would not allow us to select more than two favorites. The unit unnecessarily restricts you to home and work with no option to add any extra favorite locations. For example, it would have been useful to add my parent's house as a favorite since a lot of road trips start there. We are not sure if Mio will provide Mio owners with an update to allow us to add more information to the device via a download upgrade in the future.

Another problem we had with the C310X was that the unit asks that you enter the current date and time each time the unit runs out of batteries. We are not entirely sure why it does this, but it makes no sense that the information could not be stored in the unit's internal memory.

AN MP3 PLAYER TOO?
The Mio Digiwalker C310X also comes with an MP3 player. Though not required or necessary, it can be useful if you still do not have a propper MP3 player of your own. The MP3s are played from the SD card slot if you have an SD card preloaded with MP3s in the unit. The player is solid enough, with lots of options and as good as a sound quality you will get via the speaker that comes with the system. The graphic interface though is a bit clunky specially if you have thick fingers -- you'll have trouble select the correct song from the list more times than you would like.

Lastly, the C310X supports up to 16 languages including English, French, Spanish, Dutch, and Italian along with a variety of different voices so just about anyone should be able to use this machine.

OUR VERDICT
If you are in the market for a GPS this system is loaded with features you find in more expensive GPS units, at a more affordable price. Not only that, but the unit is ultra-portable, extremely accurate, and well crafted. With features like those, the Mio Digiwalker C310X is just easy for us to highly recommend.

Permalink • Posted by Hugo on May 24, 2007
Posted In: Miscellaneous, Reviews, Technology