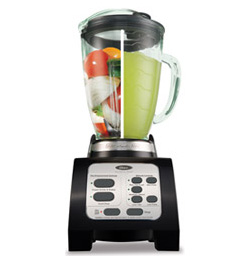 The Oster Fusion is a marriage between a blender and a food processor. It is Oster's unique take on the crowded blender/food processor market. And while we admit we were somewhat adamant at what the product tried to be at first, after we took the product for a spin we were incredible surprised at how well the machine performed.

The Oster Fusion comes equipped with a 6 cup glass jar for the blender, a food processor bowl, food processing stainless steel blades, a slicer/shredder blade, a 6-point star blade for blending, and the base where the powerful 600-watt motor is housed. Yeah, a 600-watt motor -- this sucker crushes through ice like an ice-breaking ship. More about that later.

There are five different levels of manual controls: low and max pulse, medium blend, and Max/Ice Crush. There are also two automatic controls: Frozen Drinks & Shakes and Food Chop for processing food. And course, there is the on/off button along with a stop button to immediately halt any of the automatic or manual controls.

So, enough about the specs, let's dig into the product itself.

The Oster Fusion Blends Your Soul
I'll get right to the point: The Oster Fusion blender is incredible. We weren't expecting a do-it-all blender to do what this blender did so well. We are ready to put our reputation on the line by saying that the Oster Fusion Blender is the best consumer blender on the market period. We were absolutely amazed at how well the blender crushed through ice. We made pi?a coladas and loaded the blender with cream of coconut,pineapple juice, and a whole tray of ice cubes. We hit the automatic blender button and sat back and saw the machine blend the smoothest pi?a colada we ever had. I don't exaggerate when I say that each one of us came away stunned by how fast and well this machine blended. Amazing. Simply amazing.

The way the blender works is ingenious. The six extremely sharp blades cut through the ice cube, then after a couple of seconds, the blades spin backwards pulling the ice back in for more ice massacre. This happens three to four times during the automatic Frozen Drinks & Shakes cycle then the machine blends what is left as normal. After it is done what is left is a creamy smooth mix without a single stranded ice cube.

That's not to say the machine does not have its problems. The manual controls are missing the powerful reverse control that makes the automatic system so powerful, so if you want to have that capability you'll miss it when going manual. Another problem we found is that both the 6-cup glass jar for the blender and the food processor bowl do not snap to the motor base. This makes the bowl float a top of the base as you process or blend and when you run the machine at high velocities it feels as if the bowl will shoot right out of the base and spiral towards your face. I was scared more times than I like to admit when we were slicing food with the Max Pulse control.

Slicing and Dice
Speaking of the slicer, it feels as if this addition to the product was an afterthought. Though the Oster Fusion sliced through whatever we presented, it will never replace the need for a traditional slicer as a traditional slicer will give you infinitely more control while slicing. The shredder though limited, proved to be very useful when we shredded green apples.

Final Thoughts
All in all, The Oster Fusion is without a doubt one of the best blenders in the consumer market. Though the food processor and slicing features seem like an afterthought, the blender is amazing. At a retail price of $69.99 this blender is absolutely worth it.