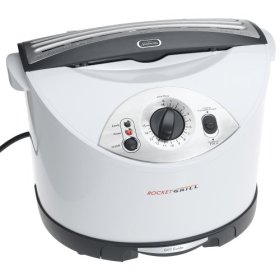 The Sunbeam Rocket Grill is a new comer to the onslaught of grilling machines in the consumer market. Like other machines before it, the Rocket Grill claims to reduce fat while maintaining flavor. The hook being that it does it at record speeds. We took the machine through some tests to see how well the Rocket Grill performed, so let's have a look.

Depending on what kind of food you are going to be cooking (fresh or frozen) will determine how much time you'll need to set the Rocket Grill to cook for. The included Grill Guide aids you in this process as it tells you how many minutes to set the timer for based on which food you are trying to make. For example, if you have two 2 servings of fresh chicken, you'll need to set the timer to 8 minutes. Alternatively, if you have one frozen hamburger that you wish to cook medium-rare, the grilling time would be 5 minutes. The Grill Guide is an incredibly handy tool that you will not want to lose, and because of this the product designers were smart enough to include a small compartment in the bottom of the unit to store it.

One of the big drawbacks of using a microwave oven or other fat-reducing grilling machines is that the flavor of the meat is typically lost when you cook it. This is not the case for the Rocket Grill and the secret is in the parchment bags that you use to cook your food.

About Those Parchment Bags
To cook your food you place the desired serving into a parchment bag. Then you anchor the parchment bag on two hooks on top of the machine and close the grill gate. The parchment bag hangs as two grill presses cook your food for the pre-determined amount of time. Here is the genius part: Hanging the parchment paper allows the fat to drip into a special compartment within the bag while retaining most of the moisture in the food to keep it tender and flavorful. The fat from the bacon in our recipe filled about 1/5th of the bottom of our parchment bag as a lot of the fat in the meat was released during the grilling process.

After the meat was done cooking (more about that in a minute), all you need to do is release the bag parchment bag from the hooks and remove your food with the included Stainless Steel Grilling Tongs. As you can hopefully imagine by now, the cleaning process was easy: you take your bag and just toss it in the garbage. It doesn't get any easier than that.

Our only real gripe with the whole parchment bag system is that the bags are one-time use only, so be ready to pony up for replacements. Just like the razor business model, here too you'll be paying a hefty price for replacements. For about $15 dollars you can net 36 replacement parchment bags at most online retailers and from the Sunbeam web site itself. Keep this in mind if you are considering buying a Rocket Grill and don't forget that you will also need to pay shipping and handling charges each time you make a purchase.

The End Result
So, how well did the food fair? We were shocked at how good the final product tasted. We are frankly used to the dry taste of chicken when we use other fat-reducing grilling machines, but the chicken and bacon tasted really good. Not only that, but we were surprised that the chicken was soft and tender, and the bacon crispy. We would even go as far as saying that it does a better job than using a non-stick pan since there is very little risk of over-cooking the chicken (something most of us have not yet mastered).

We've been singing the graces of the Rocket Grill for most of the review, but it is worth mentioning that there is inconsistency as far as timing in the included cook book and that of the Grill Guide. The cook book said to line up all the chicken in the parchment bag and grill it for 4 minutes. In our tests however, we had to grill the chicken twice in order to achieve the desired result: a fully-cooked chicken and crispy bacon. In total it took the Rocket Grill about 8 minutes to get there, the amount of time the Grill Guide said to use to begin with. We are not entirely sure why the cook book said one thing and the Grill Guide another so be sure to look at the Grill Guide when making your cooking time decision.

It All Grills Down To This
The Sunbeam Rocket Grill is an amazing cooking device. It is an evolution in the world of fat-reducing grills. It nailed every thing the machine was set out to do in our tests: it cooked food fast, it cooked it well, it removed unwanted fat from the meat, and it kept in the flavor of the food. Though the cost of the Sunbeam Rocket Grill Replacement Bags will add up over time, they are part of the reason you'll have virtually no clean up every time you use the machine. At $129.99, the Sun Beam Rocket Grill is a product we wholeheartedly recommend for anyone who is in the market for a fat-reducing grill, and for that we give it our Editor's Choice Award.


THE GOOD
- The Sunbeam Rocket Grill requires virtually no clean up.
- Grills food to perfection in a ridiculous amount of time.
- Very easy to use.
- Reduces fat during the cooking process.
- Reducing the fat does not reduce the flavor of the food.

THE BAD
- Replacement parchment bags are expensive - $14.99 for a set of 36.
- The recipe book and grilling guide do not follow the same time frame.

Permalink • Posted by Hugo on August 1, 2007
Posted In: Kitchen and Baths, Miscellaneous, Reviews