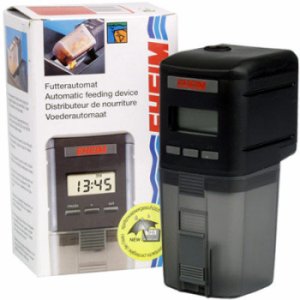 is Eheim's budget friendly Automatic fish feeder at an average price of $49.99.

What's Included
In the box you will find the EHEIM 3581 Battery Operated Automatic Fish Feeder unit, an Instruction manual, and a Velcro pad to fasten the unit if necessary. They even include the two AA batteries it needs to operate.


The Facts
The Eheim automatic fish feeder is well worth the money, and outperforms many fish feeders on the same price rage. It is a solid functioning feeding machine that will not let you down. The Fish Feeder measures 5-1/4" x 2-1/4" x 2-1/2". It is a sleek little machine that will take away your worry about who can you trust to feed your fishies while you are away. The system is adaptable to virtually any aquarium size or livestock. The automatic fish feeder allows you to program up to four portions per feeding and four different feeding times per day. It allows you to adjust to precisely the amount you want to feed your little critters daily. You can even feed them different portions at different times. For instance the aquarium that we used to test out the unit on is a 92 gallon reef aquarium with a couple of emerald crabs, sally light foots, and some cleaner shrimp. With ordinary fish feeders it would be little hard to feed these guys because it is hard to pinpoint when to feed the fish and Invertebrates. With the Eheim I could make a 1 or 2 portion feedings early in the morning before the fish come out to play. This allows my food pellets to sink to the ground and provide food for the crabs and shrimp. Later on during the day the fish will come out after the automatic lights turn on pretty much any food that is automatically fed by the Eheim Automatic feeder present in the tank will be devoured by the fish within 3 minutes. Since the Eheim allows for up to four feedings I can give the livestock smaller portions but at different times throughout the day just like they feed in the wild. If you like set the unit to give more than one portion, the unit is smart enough to separate the portions with a one minute interval so you are sure not to loose any of your food to filtration because the fish will have enough time to get all of it. It will also prevent the food from decaying in your tank causing your water parameters to go haywire.

You might think that if you leave your food in the container a long time it will get spoiled by the humidity and evaporation in your tank, but Eheim has thought about that also. They put a tiny fan in the unit that will bring in fresh air to the food at every feeding. We tested the unit for over three months with a mix of Ocean Nutrition Formula One Pellet

mixed and still the food was still fresh after the test.

the unit tended to not be heavy enough to displace the weight causing it to tip over. We could only fill the container about 2/3 of the way to be safe. This was a negative, but if you look at the unit you will notice you need not to worry. It does have a pretty big container that although filled only 2/3 of the way will be more than enough for a long time (depending on your feeding habbits of course). We did not use the small Velcro to affix the unit to the area it was resting on as doing this may have prevented it from tipping over. Our thought was that since it is humid around the tank at all times we did not want our safety to be a piece of Velcro that might lose it's sticky tape after some time. It would be too expensive to replace all the livestock in the tank if they die due to overfeeding if the unit were to fall in the tank.

During our test run we also tried putting in bad batteries to see what it would do. The unit sure enough lets you know that your batteries are low by displaying a flashing sign on the LCD which is great. What if you don't look at the LCD? Well then eventually your batteries will die and the unit stops spinning to feed. The LCD remains blinking for some time and gives you another visual telling you that the unit is no longer operational. Again, this is great if you are looking at it but doesn't help if you use it for daily feeding and you don't really look at it. I would suggest an audio chirp to let you know but then I have never seen another feeder with this feature so I guess we can't knock them for that.

The last thing that our team was not impressed with was the lack of a latching clamp system. Many aquariums don't have a flat surface to mount such an accessory and will in turn not be able to use it. Lucky for us our 92 gallon corner aquarium had two plastic supports for the glass on either side of the tank that we were able to use to mount our fish feeder.

just because you will be out for a weekend and don't want to spend that much money We suggest you don?t. Splurge and get the Eheim's 3581 Battery Operated Fish Feeder

. Sure it's a little more expensive but you will be glad you got it. Before getting the Eheim we had the el cheapo version fish feeder like the
Penn Plax Daily Double Fish Feeder

and it makes a world of a difference. The Penn Plax operates like a clock it will only provide two feedings a day no more or less. It is hard to adjust the time you want your feeding because there is really no way to do it accurately. There is no moisture protection for your food, and lastly no way to tell if it is even working without waiting a few hours to see if the drum is spinning. It will be a safer bet to get a unit like the Eheim where you can see the difference immediately and even test the unit using its manual feed button.

THE BAD
- Can't fill the food container all the way if using heavy foods
- Lacks an audio alarm to tell you when the batteries are low.
(it does feature a visual alarm but I just like to set it and forget it.)
- Lacks a clamp to fasten the unit to the back of your aquarium or hood.

would this auto feeder work with the 30L bio orb rounded aquarium??

thanks
SEOrocks
UL - Staff Posted Dec 20, 2008
We are not familiar with the 30L bio orb but if it has a ledge that you can sit the feeder on it should work. Remember the feeder has no clamp on it so the only way to mount it is on a ledge where the entire back grey part should rest.
christopher Posted May 11, 2009
What is the longest average time it will feed. I am military and can be gone months at a time. I like the fan option so I know the fish are getting food.
Dr. Bob Posted Nov 9, 2009
My Eheim Automatic Feeding Unit, 3581, has stopped working.

When fresh batteries are inserted, the food cannister rotates continuously, and the unit cannot be programmed.
UL-Staff Posted Apr 14, 2010
Christopher, We wouldn't advise using any means of automation if you will be gone for months at a time. The longest I would probably recommend any of these systems would probably be a week. If you must have automation I would recommend at least having someone swing by and take a look at your aquarium at least once a week. There are more factors that must be checked like water quality for instance. Will someone be doing your monthly water changes? Anyway Since this review was published I have personally had to replace the unit but still feel stronglt about this being the best option for the price.
Allen Richards Posted Aug 12, 2010
Thank you for the detailed information guys. Though this automatic fish feeder has some flaws, overall it is a good product which eliminates the problem of feeding fish at regular intervals. But can the flaws be fixed anyway?