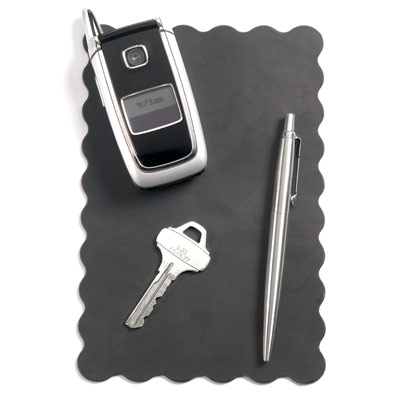 I thought the SmartPad was a bunch of bologna when I saw it advertised - until I saw it in action in a friend's car. The silicone base pad (looking a lot like a mouse pad) attaches to the surface of your car's dashboard, refrigerators, computer desks, etc... and leaves no residue, which is honestly the best thing about this device. Throw mobile phones (how British of me), MP3 players, sunglasses, GPS, on top of it grips on to it. One small caveat is that it also tends to collect dust, so you'll have to wash it with water every once in a while so it regains its strong-man like grip.

Found at The Container Store for $9.99

Permalink • Posted by Hugo on February 27, 2009
Posted In: Miscellaneous