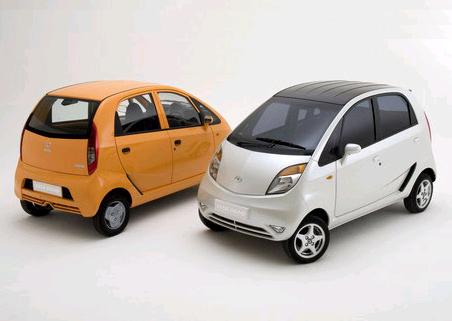 Looking for an inexpensive car to get you from point A to B? Tata Motors an Indian company has developed the NANO just for you. The car is 10ft long, seats four and will sell for roughly $2,500, so pretty much anyone on an allowance can get one. Why is this car so cheap? Well in order to offer the car this cheap they had to make some cut backs on what regular people want on their cars. Don't expect to have Bluetooth on this little guy, in fact lots of the features you have on a regular car are extras on this guy. For instance air conditioning, power brakes, radios, etc. are all missing from the entry-level model.

What did you expect for a car that costs about as much as a high end refrigerator? The engine in the car is made from an aluminum block just like the old generation Volkswagen beetle was. Actually the Indian company dubbed the car "The people's car" just like Volkswagen had done with the beetle. Instead of welding you will find adhesive which is not so great but that's how they keep the cost down. Don?t expect to find any air bags on this guy either.

The vehicle can climb up until about 65 MPH where it will top off, It does however get about 50 miles to the gallon though with its 2 cylinder 623cc engine. Can you say lawn mower? Actually its about twice as powerfull as a conventional lawnmower you would have at home.

The Nano has a modular design. Tata Motors takes advantage of this and sells these as kits, this way regular people can purchase one of these and build it in their own garage if they enjoy that sort of stuff. Kind of crazy but cool at the same time.

The car is available in India currently but is destined to hit the US within the next three years. Because the US has stringent safety standards, it will have to go through a few redesigns before it starts being sold here.

john Posted Mar 24, 2009
I wouldn't touch the Tata Motors Nano with a ten foot pole.
Joe Posted Mar 25, 2009
Looks and sounds terrible....
BMW parts Posted Jul 25, 2009
Even though the Tata Nano is way cheaper than a BMW, I would never buy it.
Toyota Posted Nov 28, 2009
I remember toyota had a concept car like this before, a very cheap car with the basic functions of what a car should do. I wonder what happened with that car
chevy 350 engine Posted Jun 28, 2010
With many years of experience and expertise in the field of Chevy / GM motors - you will be delivered a high quality engine that we are willing to stand behind for 7 full years - 70,000 miles! In addition to providing Chevy 350 motors for individuals, Chevy 350 Motor also provides powertrain products for several OEM manufacturers and are ISO 9002 and QS9000 certified.