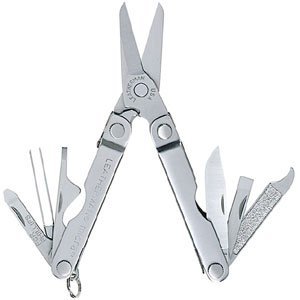 I have always been a handyman around the house and I often get calls from people who need some sort of help -- whether it's installing a microwave, getting a PC built, or building a deck outside the house. I guess you can call me a jack of all trades, master of none.

I often found myself without the right tool when someone would call me to do something silly like tighten a screw. I started carrying a Swiss Army Pocket Knife Swiss Champ but lost it. After some time I found myself needing something to replace it and felt that the Swiss Army was good, but it lacked ruggedness. I then went for the Leatherman Wave Multitool, which I also lost after a couple of years of use. I finally decided I needed to replace it, but didn't go for the Wave because all my pants would get holes in the pockets since it was so heavy. So, the end result was something small and manageable.

Enter the Leatherman Micra Multitool. I wish I had gone with this one first as it has proved to be a very rugged tool for its small size. It features a nice set of scissors, a sharp small blade, tweezers, a nail file/cleaner, flat Phillips screwdriver, extra small and medium screwdriver, bottle opener, and a ruler. Best of all it fits easily in your pocket and if you attach it to your keys, you will never leave home without it.

THE GOOD
- Good construction.
- Great assortment of tools in such a small tool.
- Easy to carry anywhere you go.

THE BAD
- A bit expensive.

IN THE BOX
- One Leatherman Micra Tool.

WHERE TO BUY
Amazon

Permalink • Posted by Hector on April 5, 2010
Posted In: Reviews, Tools