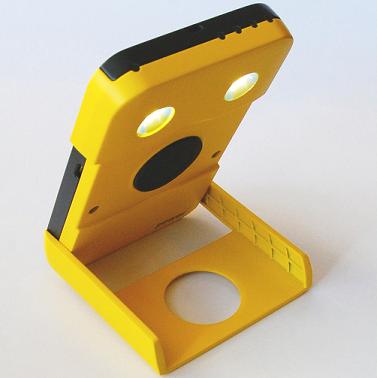 Need a handy light for those camping or fishing trips? Give the WakaWaka a try, the WakaWaka light is a self contained unit with an 800 mAh NiMh battery that can be charged using the sun.

The WakaWaka can run at least 2 days on 1 cycle charge. On a full battery (less than 1 day charge). WakaWaka provides 8 hours of bright ambient light, 16 hours of bright reading light, or 80 hours of soft night safety light. We have to admit that is pretty darn cool. The WakaWaka

has been tested to provide 16 hours of light on less than a day of sunlight.

It is a rugged and resistant to extreme environments such as rain, dust, and heat so it can be left outside charging without an issue. The WakaWaka uses super bright high power LED`s from Seoul Semiconductors. WakaWaka only uses 0.5W and generates 60 lumen with it. It features 4 light modes to give you the light you need in any kind of situation. You can choose from 120, 60, 30, or 6 lumen's and finally an SOS mode for those unfortunate situations where you might need it.

Order your WakaWaka on Amazon

There is also a new version that WakaWaka announced in a press release that will feature a larger battery and a USB charger for your mobile phone or tablet. The new version is going for about $69-79 USD.