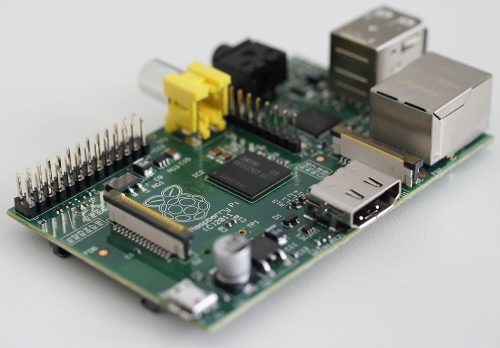 The Raspberry Pi is credit-card sized mini computer that measures 85.60 mm x 56 mm x 21 mm, and weighs 45 grams. It is already on its second version (Version B) and has been a hit among the techie population. The device can be used for a plethora of projects and its limits are only your imagination. Although tiny, it packs a punch with all its inputs and outputs. This tiny pc has an SD card slot (this is where they store the operating system), RCA Video out, 3.5mm audio jack, USB ports, 10/100 MB Ethernet port, HDMI port, and finally general purpose input/output pins that can be programmed to do stuff.

can plug into your high-definition TV or computer monitor and virtually any usb keyboard. The Raspberry Pi is capable of being used for many of the routine things a regular computer can do but was primarily created to teach children all over the world to learn programming.

The Raspberry Pi gets its power from a 5v micro USB port. You can even run the device off 4 x AA batteries but it is recommended to use a voltage regulator if you go that route.

Debian is the default distribution of choice, but the Raspberry Pi lends itself to work with other distributions as well. Python is the educational language of choice and is natively supported by this mini computer however, any language which will compile for ARMv6 can be used with the Raspberry Pi. We think this little device is so cool that we couldn't pass up telling you about it.

You can get yours on Amazon

Click here to see some projects created with the Raspberry Pi.

Permalink • Posted by Hector on April 3, 2013
Posted In: Technology