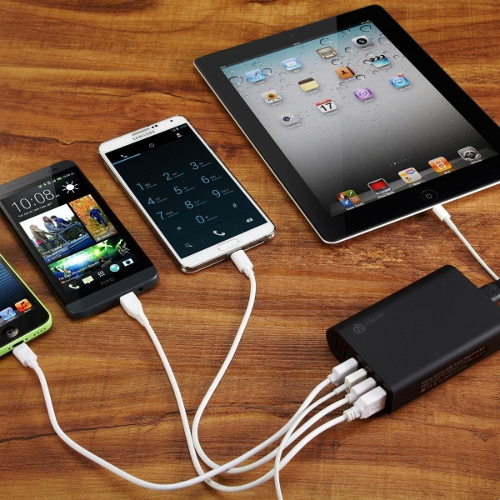 We recently received this unit for review and have been using it for a little over a month. At first we didn't really see much use for this device but it grew on us. The 6 port iClever USB Travel Wall Charger

features 6 usb ports all with the SmartID technology that identifies what type of device and charges the device at up to 2.4 amps. The device is capable of having all 6 ports produce the same output current which means you can charge multiple tablet devices or phones simultaneously.

We were able to test charging two ipads, a note 4 , and an iPhone simultaneously while still having several ports available for charging other devices. The devices all charged up as quickly as they would have with the charger they came with. The exception being the note 4 which didn't identify the charger as a fast charger but still charged at the regular speed. Note that Samsung has a new technology that allows for quicker charging. Aside from that we were very pleased with the device.

We feel this device comes in handy for travellers specially when you can only find one outlet in the airport but might need to charge your family or co-workers phone(s) or tablet(s). We noticed it's usefulness today as one we had to go to a hospital and were faced with the only one wall outlet available dilemma. The iClever did it's job and we were even able to let a stranger plug in his kids tablet so that he can continue playing his Rayman jungle game. In this instance the three devices plugged into the iClever Travel Charger were not only able to continue to be used but actually charged even as the devices were being used. This was the moment we realized what a great investment the product was.

has a small footprint but can get easily tossed around because it doesn't weigh much. It's a bit larger than a stack of cards and has a 5 foot power cord which is long enough.

You will need to provide your own usb cables as none are provided with this device. Finally the device does have an indicator light that let's you know when it has power and is available for charging.

The Good
-Good build, feels lie a quality product
- The price is right. Currently $25.99 on Amazon

- Ports can be used simultaneously

Permalink • Posted by Hector on April 14, 2015
Posted In: Reviews, Technology