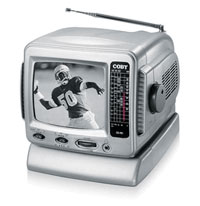 A radio is important during the hurricane season, but even more important is a television set.

Forget the fact that the Coby 5 inch Portable Television set is black and white. We know that technology has come a long way since the days of black and white television, so we know this television set is underpowered when compared to the color tv sets you find at your electronic superstores. Definitely don't expect HD quality here. What you can expect however, is a TV set that will last a great deal of time on battery power during a hurricane and during the grueling electricity-less aftermath. Best of all, the tv is very affordable: about $17 online and $25 in local retail drug stores.

The TV set has full VHF & UHF channel capability, three ways to consume power (AC/DC Adapter, Car/Boat DC cord both included and batteries). It also has a 3.5mm headphone jack so you can listen to the news as your kids sleep, and it allows the capability to connect an external antenna for better reception (although I've had this tv set for quite some time without the need for one). It also doubles as a radio, so you can carry this around and get the functionality of both.

For those with more money who would like a little something extra, Coby also produces a 5in TFT LCD TV/Monitor (Model TFTV505) which retails for about $114.95.

Permalink • Posted by Hugo on May 23, 2006
Posted In: Miscellaneous, Technology