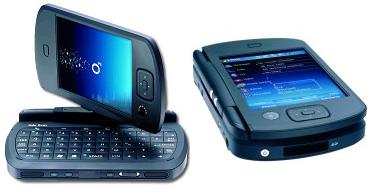 HTC, the world's leading manufacturer of Smartphone's and Pocket PCs, has created a monster. At 128 x 81 x 25 mm and weighing in at 285g, the O2 XDA Exec although a bit bulky remains relatively pocket friendly. The XDA 3G Phone features tri-band GSM 900/1800/1900 MHz and GPRS Class 10, the communicator is also the first Windows Mobile device to support 3G in the shape of WCDMA 2100 MHz - also known as UMTS.

Some other features that stand out are Bluetooth, Wi-Fi 802.11b, Infrared and USB 2.0. The USB port allows for synchronizing with your pc as well as charging, which is simply amazing. There is also an SDIO capable SD/MMC card slot which comes in handy to store all your documents, movies, and mp3's. The storage card can even be used to install numerous programs.

The clamshell-style unit houses a 520 MHz Intel processor which is plenty of processing power. There are various names for the device depending on the carrier but all are exactly the same with the exception of the housing color.

One of my favorite features is the QWERTY keyboard; it is big enough to allow for fast thumb typing yet small enough to fit in your pocket. The high-resolution LCD display (640x480) doesn't fall behind it is great when you are using the 1.3 Mega pixel camera. The camera also allows video capture with audio. It is simply an amazing device way ahead of its time. The HTC Universal O2 XDA Exec also goes by the following names i-Mate JasJar, SPV M5000, MDA Pro, Qtek 9000, and Dopod 900. With this device you can combine your cell phone, pda, camera, and personal movie/mp3 player into one.

The device is currently not sold in the US but keep an eye out it may be on its way sooner than you think.

Permalink • Posted by Hector on July 8, 2006
Posted In: Technology