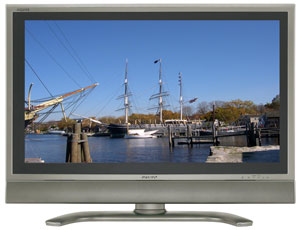 Ask any videophile "which is the best LCD HDTV on the TV market?" and you'll more than likely hear, almost unonimously,
about the Sharp AQUOS line of LCD HDTV screens. Sharp AQUOS LCDs HDTVs brightness is usually sharp (haha) while the black colors are typically fairly accurate (though not as accurate as CRTs or Plasmas). This in turn helps produce a very nice television picture. However, what makes the new Sharp LC-37D90U 37-inch widescreen LCD HDTV special is the resolution it supports. This set supports what the television industry likes to call "Full HDTV resolution" or 1080 progressive scan (1080p) resolution. This is the first LCD screen to hit the US market that supports that resolution. The first television to support 1080p was the Sony Grand Wega SXRD Rear Projection HDTV.

You will also hear that that on a small screen like this no television set will take advantage of the clarity of the 1080p resolution -- that 720p resolution should be more than sufficient. However, maybe it's just the components in this Sharp model, but the picture quality on this Sharp television is so astonishingly gorgeous, it puts the other 720p sets to shame. The picture quality on this set running off a copy of the Fifth Element on a blu-ray disc was significantly better than the same set up running on a 720p set. I didn't think I would notice the difference, but I did.

Also important is that the Sharp LC-37D90U can produce pretty nice Standard Definition television signal. Admitedly this TV does not perform in this arena as well as some of the better Plasmas or the Philips 37-inch LCD HDTV (37PF7320A).

Seeing as I was shopping for a good 37-inch LCD TV and it was between the Philips 37PF7320A and the Sharp 37-inch LCD Model LC-37SH20U, after looking at this set in person I think it is worth waiting a couple of more months and snatch this set when the price drops -- it currently retails for $2,999.99. It is expected that LCD and Plasma screen prices will drop another $200-$600 dollars per set this fall because of the upcoming downpour of 1080p models.

EDIT: One quick correction, the Sharp LC-37D90U is not the first 1080p LCD on the market. The Westinghouse LTV-40w1HDC was the first LCD 1080p on the market in the US. We goofed.